The Arctic Grayling is a smaller member of the salmon family and seems to be as much a part of Alaska as the salmon are. It's a beautiful fish to cast a fly for but, while beautiful, the grayling is an oddly styled fish with a huge sail-like dorsal fin that helps them navigate the streams. This species presents a variety of colors depending on its habitat and food source. It is not uncommon to find these amazingly colored fish displaying a dark side color with beautiful iridescent spots in red, purple, and even blue/green. Their amazing colors help them blend into the dappled waters of the summer streams and lakes throughout Alaska.

Grayling typically weigh in at just over five pounds with a body length up to 24 inches but they still fight like crazy and are fun to fish for because of their intelligence. These fish may well be the smartest fish in the salmon family, and due to their smaller size, they use their smarts to survive in rivers where there are predators like Northern Pike. Their voracious appetite, and the fact that they mainly eat insects, makes them outstanding targets for fly fishermen. 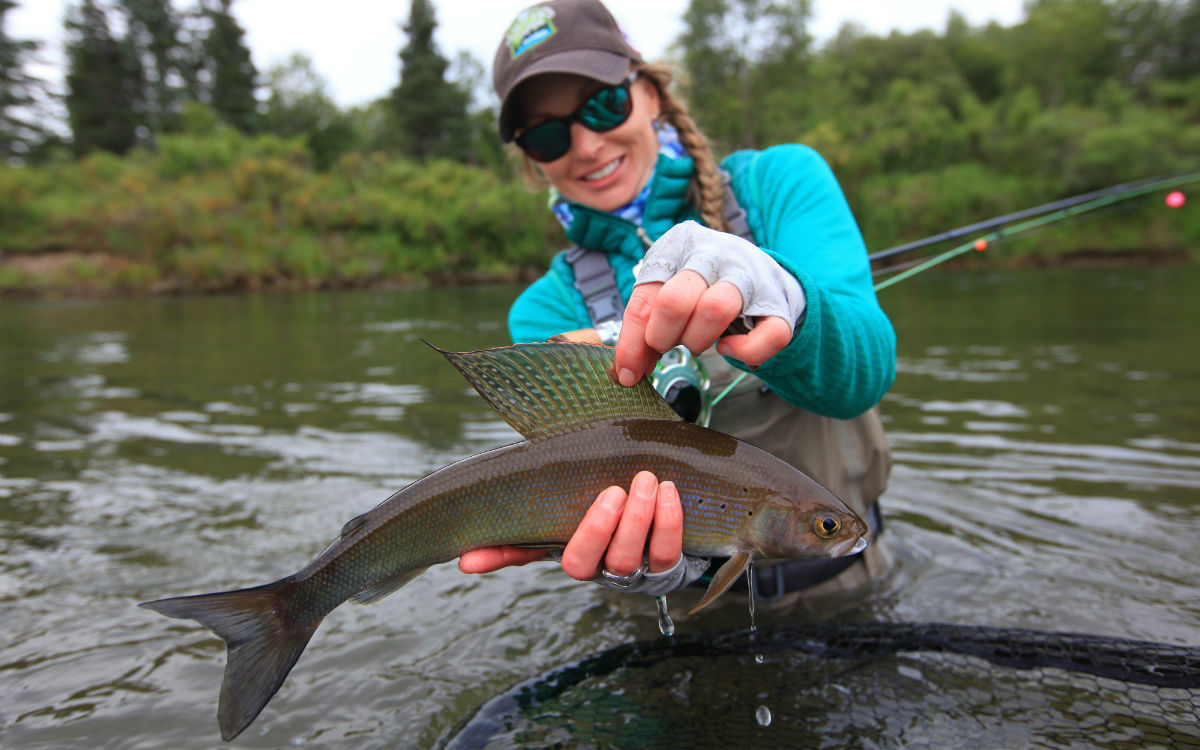 Arctic Grayling are primarily insectivores - they love their bugs. When fishing for them, try flies that are insect-like such as those that mimic the mayfly flies, black flies, caddis flies, and stone flies. Some common flies to try would be the Black Gnat, Royal Humpy, Sparkle Dun, X Caddis, and the Bead Head Stonefly. If they are hungry, arctic grayling will chase almost anything from which they can make a meal. Their first choice of food will be aquatic insects but will strike surface flies that resemble non-aquatic insects such as bees and dragonflies so you might try a deer hair Bee Fly or a Gibson's Dragon Fly. If you are not having luck with insect flies switch to a mouse fly because they have been known to eat small invertebrates such as shrews and small mice. They will happily sip salmon eggs too.

By nature, species in the salmon family are opportunistic feeders. The Arctic Grayling has developed a niche that allows it to compete effectively with larger fish such as Rainbow Trout, Dolly Varden and even Salmon. Think smaller flies.

Live on the edge, experiment with fly options

The Arctic Grayling has keen eyesight and is constantly on the lookout for both predators as well as prey. It is not uncommon to see the fish lounging in a pool and still finding it impossible to entice it to strike - change your approach and you may find success.

Where to Find the Beautiful Arctic Grayling

You can fish for these beauties almost anywhere there is a clear bottom creek. They are visual feeders so waters with high turbidity are not likely to hold them although, oddly, you can sometimes find them in the turbid waters of the Tanana River. The three places that you will NOT find these fish are on Kodiak Island, along the Aleutian Island chain or in the far Southeast of Alaska's sounds and saltwater islands. Everywhere else that has clear waters and a gravel bottom stream is a likely candidate for Arctic Grayling. In the lower 48 states, they are mostly gone except for a few stocked lakes in California and Montana. Fortunately, Alaska is full of beautifully clear streams with nice gravel beds and that is where you will find Grayling.

In a river environment, you will find these striking fish almost everywhere. These guys love to hang in the quiet pools adjacent to ripples. Ripples and shallows are often a haven for aquatic insects and smaller Graylings will work these areas when hungry. You will also find these beautiful fish in the faster sections of the river. Their sail fin allows them to deal with currents and they may use the speed of the water to out-swim predators or to chase down smaller fish.

Arctic Grayling are also known to live in lakes. They like the deeper water and can survive where there is less oxygen. Benthic fish (those that like the bottom) such as these require a deeper pole setup when fishing for them in deep lakes, but in shallow rivers and streams dry flies are the weapon of choice. When fishing for Arctic Grayling, in lakes, take advantage of aquatic vegetation, and the quieter pools around these plants. Many insects use vegetation as a haven for food and you will likely find grayling where you find aquatic insects.

Also, since these fish have lower oxygen needs, they are awesome to fish for in frozen over lakes in winter. Arctic Grayling in lakes almost always stay there year round while the river Graylings will migrate to spawn. It is not uncommon to see them along the margin of a lake or slower moving river sucking down insects that dot the water.

A lot of anglers turn their nose up at Arctic Grayling because of the overwhelming selection of larger sports fish such as salmon, steelhead, rainbows and even pike. The beauty of grayling is that they are smaller and smarter. One of their best qualities is that they will strike a dry fly with ease and vigor. It is not uncommon for these amazing fish to leap completely out of the water to take a fly that is dangled. Their sail fin allows them to achieve a lot more for a fish their size. Sit back and watch them work. They are impressively agile, and we should all be thankful for them and their love of flying insects such as the dreaded mosquito.

Rod Set Up for Grayling Fishing

A light rod is all you need if Arctic Grayling is your target, a pole that is under a 6 weight is good. A rigging with a nice small fly on a 7-10 foot leader is an outstanding attraction to them and ideal flies are between 10 and 18 in size.

Fly the fly that flies the river

Pay attention to what is happening around you because the rivers and lakes are full of signals. There is a dance that stretches forth each year between the fish and their environment but many anglers miss the clues right in front of them. As the summer waters around Alaska begin to teem with aquatic insects that are both emerging and dropping eggs back into the waters, the little Grayling are feasting on mayflies and mosquitoes. Those are all clues as to what kind of fly works best. The food source in one river may not be the same in the next. This cycle of life is tried and true, however, and most fish are tied to the salmon spawning and consume poorly buried salmon roe.

This little dance is marked by time and season, and the fish are acutely attuned to it. By watching your environment, you can determine a number of choice fly-types to not only catch Grayling but other fish too. A good tip is also to look at the stream or river. If you are looking at a long and narrow corridor use a smaller bobber on a longer lead to float the fly downstream. If you are in a wider stream or river, then experiment with your fly pattern. These fish can be challenging or they can be easy targets. Either way you will have an outstanding time fishing for Arctic Grayling.