King Salmon (Oncorhynchus tshawytscha ), also known as Chinook Salmon , are the monsters of the Salmon Family. The official state fish of Alaska, Kings are the largest of the salmon fish and one of the most highly prized fish in all of Alaska. The average King Salmon size is approximately 24 to 36 in (61 to 91 cm) and 10 to 50 lbs (4.5 to 22.7 kg). The largest King Salmon on record (sport record) is a 97 pound King caught on the Kenai River in 1985, by Les Anderson (the commercial record is 126 pounds). It is their size and fight that make them so highly prized by sports fishermen, and rightly so. The question is how to catch them. 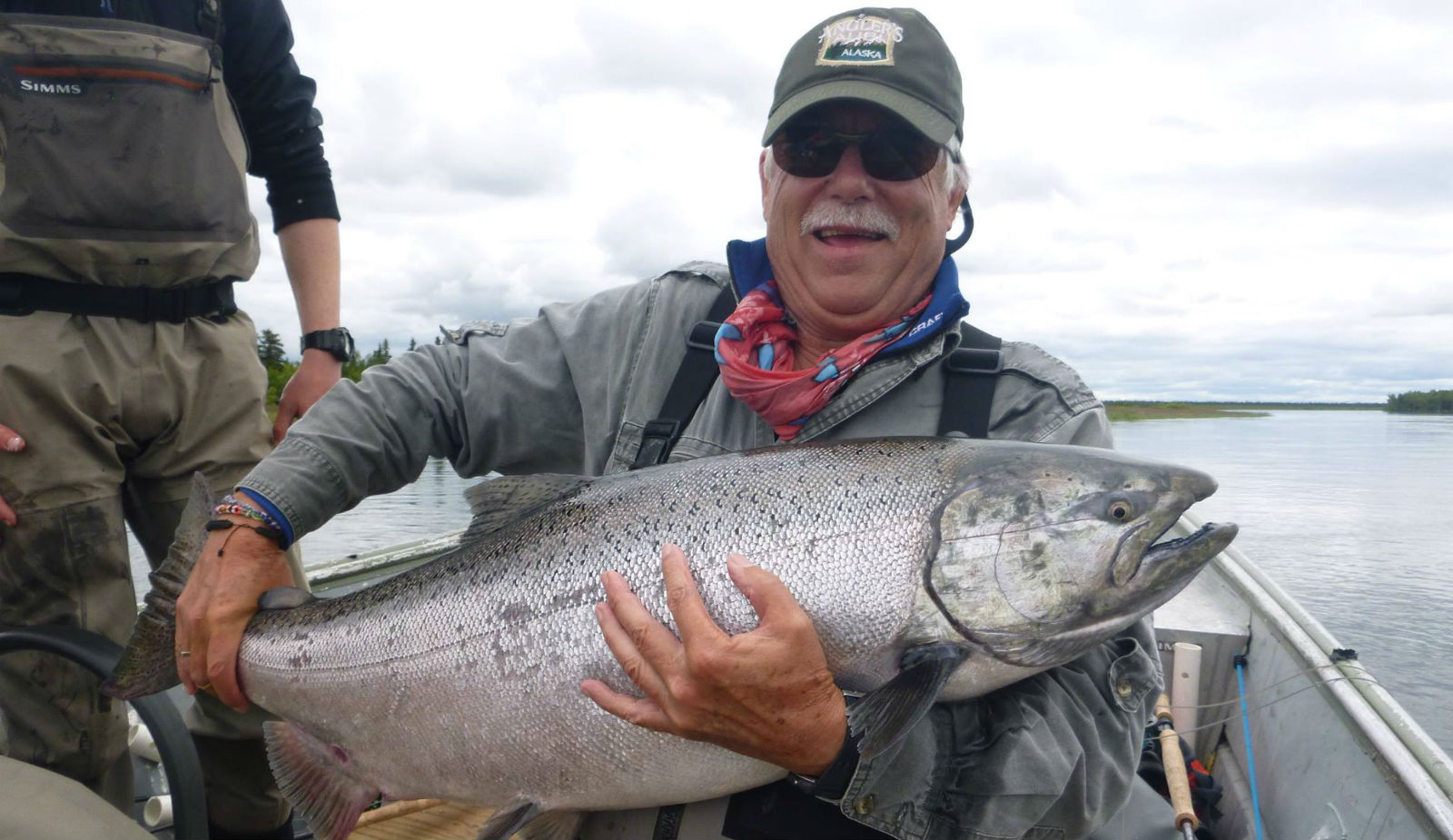 Where and When to find King Salmon?

The life cycle of the King Salmon involves both freshwater and saltwater so you can find and fish for adult King Salmon in both types of water. In the oceans and bays around Alaska, the kings start to make their way from the deeper waters towards the inlets and deltas along the western shores and along the Gulf of Alaska. This process usually begins to peak in May along the Southeastern side of Alaska. Peak saltwater runs in the waters of the Bristol Bay Watershed occur in June, but along the Kenai Peninsula the saltwater peak season for King Salmon is extended and runs from May through August .

Some of the best places to fish for King Salmon are at the mouths and tidal waters of many major rivers such as the Alagnak, Susitna, Kenai, Nushagak, Copper, and the Stikine. For freshwater fishing, all of these rivers and many of their smaller tributaries make outstanding locations to catch king salmon.

When the salmon get ready to head upstream to spawn, they undergo a major metamorphosis. They begin to gorge on food and then their body changes so that they can move from salt water to fresh water. Part of the change that they undergo is that they stop eating. They have only one mission left in their life, and that is to spawn. So why do they strike flies or lures? Salmon are aggressive fish and that high level of energy causes them to react to things in their environment. Part of their biological drive is to give their offspring the best chance they can for survival. Even the rivers of Alaska have a limited amount of resources for small fish. So, salmon strike at things that look like other salmon eggs because by consuming the eggs of other salmon, they give their offspring more opportunities to find food come spring when their own roe hatches.

Fishing for King Salmon in Alaska

Charter boats for ocean fishing such as those provided by some of the Alaska fishing lodges or from any of the charter services work well for trolling for salmon. Drift boat and shore fishing are both fine methods for catching king salmon in the rivers, lakes, and estuaries.

Unlike Silver Salmon, the King Salmon are not going to yank the rod from your hands. It is important to watch your fly or line as it floats downstream. Try to set the hook if you notice that the stream has stopped carrying your line. If your fly has been taken by a King, the fight will begin immediately after you set the hook.

In the saltwater arena, salmon flashers work well because salmon are predators and they eat small fish such as smelt and herring. The salmon are still gorging because anything they can eat will help them pack on energy or fat they devour. In the freshwater habitat smaller spoons and brightly colored flies work well. At the beginning of the salmon run the roe is usually bright pink but, by the middle of the run, the color has toned down to oranges and lighter shades of pink. By choosing fly colors that mimic the natural colors of salmon roe fishermen have a better opportunity to temp a King to strike.

Think brightly colored flies, spoons and spinners. Pink, orange, red, silver, neon green and sometimes even yellow are all colors that work well with Kings. Fly sizes at six and under. If you are in a river that allows bait fishing, consider using salmon roe in netting. As a substitute, you could try trout roe too. Tie a dab of them in small gage netting. You want it to be about the size of a regular marble. Then just place it on the hook. It is also a good trick to use for Steelhead too.

It's important to note that King Salmon typically hangout along the bottom of the river. So the best place to place your fly is towards the bottom.