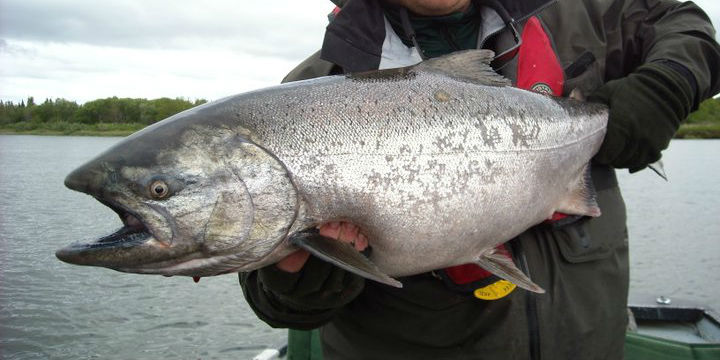 Jake's Nushagak Salmon Camp sits along the Nushagak River. The river is known to host the largest King Salmon run in the world. Throughout the season, more than 300,000 King Salmon make their way up the Nushagak River to spawn. The Benefit of staying at Jake's Nushagak Salmon Camp is that the fish are right at your door. There is no need to fly out or spend part of your fishing day commuting to where the fish are. They are here.

This is a fish camp. The focus here is on the guest experience and quality fishing. Guests are lodged in tent cabins that have wooden floors and basic amenities. Expect your stay to be comfortable, but rugged. That is the way life is on the Nushagak River. There are no permanent structures allowed by the Natives. The focus for the river is always its preservation. That is one of the reasons why this is the best fishing spot in all of Alaska.

Each tent cabin is fitted with two guide cots with mattress. The camp features a full kitchen tent that produces restaurant grade meals. The dining tent is comfortable and warm.

As mentioned, this is the King Salmon Capital of the World. The Bristol Bay watershed is also known as the Salmon capital of the world. When the Kings are slow, the Reds, Silvers, or Chum Salmon are ready to play. The Red Salmon flock to Bristol Bay Water Shed by the millions and later in the summer, the Silvers take fishing to a whole other level.

Kings along the Nush weigh between 15-50 pounds. On an occasion, you may land a 60 pound King, and if you are truly destined to be the greatest fisherman on earth, you will land the Salmon that breaks the 126 pound record. Most of the bigger Salmon are released back into the river as they are females, and their successful migration means better fishing in the next years. The smaller fish are usually males, and those are just perfect for eating.

Other Fish and Monsters of the Nush

If you max out on Salmon, then rig up for Rainbows. The Rainbows are known to follow the King Salmon in hopes of making a meal out of King Salmon roe. A slight switch in flies for fly fishermen will allow you to target Rainbows over Kings. Later in the Summer, when the silvers are in the water, the Dolly Varden appear. These are large trout like Char that are often mistaken for Rainbow. They offer a great deal of fish, and they are quite a beautiful fish. There is other fish present too, and you might get a chance to battle a northern pike or the smaller Arctic Grayling. The beautiful thing about fishing on the Nush is that you catch a ton of fish.